The following funds provide for nonprofit organizations that are preserving community heritage or are directly enhancing the physical, economic, or cultural vitality of the county.

This fund was established by the Blackford County Animal Shelter in 2010 with the generous assistance of the Blackford County Humane Society. The fund supports the Shelter’s mission of providing temporary shelter, care, and medical attention for stray, surrendered, or otherwise homeless cats and dogs in Blackford County; preventing animal cruelty and neglect; strengthening the human-animal bond through education and adoption; and promoting the importance of spaying and neutering to help control the pet overpopulation.

This fund was initially established to support the maintenance of the Civil War monument located on the southwest corner of the Courthouse square. The names of more than 950 Blackford County Civil War veterans are displayed along with the Gettysburg Address on the granite base of this monument.

This fund was established in 2010 to support faith-based initiatives within the county.

Established in 2017, this fund is to be used for development activities related to revitalizing the downtown Hartford City area.

This fund was established by the Ervin and Blalock families in memory of Annette Ervin Blalock, who especially loved spending time with her Great Danes. The fund is dedicated to the welfare of companion animals.

Vincent F. and Anna C. Cimino created this fund in order to provide support for newly identified community needs, such as a school program for developing an awareness of the trades as a career option for students and also the Blackford County Youth Golf Program.

In 2019, the Fishers created an unrestricted fund at the Foundation that provides for a wide variety of community projects. The fund was partially supported by a grant directed to the Foundation by the Fishers, who participated on a program sponsored by the Monsanto Fund that allows farmers to support local nonprofits about which they care.

Ruth Flatter-Oswalt established this fund upon her death as a gift to four community organizations, the Hartford City Public Library, the #106 Masonic Lodge, the Hartford City Elks Lodge #625, and Cancer Support of Blackford County. Mrs. Flatter-Oswalt was a native and lifelong resident of Blackford County. She and her first husband were married for fifty-one years and spent most of their lives farming. Mr. Flatter died in 2000; Mrs. Flatter-Oswalt later married Robert Oswalt.

This fund was established in 2016 to support the initial construction and later the upkeep and maintenance of a nature play area located behind the Hartford City Public Library.

The Hartford City Rotary Club established this fund in 2012 to provide support for its community projects and for maintenance and repair of the Girl Scout House in Hartford City.

This fund was established by Lois (Huffman) Hoffman and Edgar Huffman in memory of their parents Floyd and Betty Huffman, who were local accountants and county auditors dedicated to helping others and were involved in many Blackford County activities. Floyd Huffman started the first radio station in the county, WHCI, in 1954. The fund provides additional financial support to projects established at the Foundation that improve the quality of life in the county.

Christopher B. and Kristie A. Jennerjahn Advised Fund

In 2013 Christopher and Kristie Jennerjahn set up a donor-advised fund that allows them to recommend to the Foundation which charitable organizations and projects they wish to support with grants. This fund is specifically designated for nonprofits that advance Christianity.

This fund was established in memory of Thomas Dwight and Florence Bernice (Bowman) Johnson, who lived to the ages of 72 and 91 respectively. Mr. Johnson was the first letter carrier in Montpelier, and Mrs. Johnson was a telephone operator there for many years. The fund will provide support and enhance the charitable work of the Blackford County Community Foundation.

Established in 2004 with the help of former mayor Kenny Neff, the 100-Year Fund was created by ten donors. Additional donations may be made in order to increase even further the fund’s financial growth. The anticipated payout to the local community should exceed $1 million by 2104.

Gretchen Oberholzer established this fund in 2016 in memory of her husband Hal. The fund  provides financial support for the maintenance and upkeep of the basketball court at Hoover Park, a project that was dear to the heart of Hal Oberholzer, who was originally involved in building the court. He wished to make sure that local young people have a safe place to play basketball.

This fund was established by Florence Bernice Johnson, long-time resident of Montpelier and a telephone operator there for many years. This financial resource is used to maintain the Oddfellows Cemetery in Montpelier.

The board of directors of the Foundation began this fund in 2020 to address the needs of local nonprofit agencies and programming that may be dealing with the economic issues of the COVID-19 pandemic.

This fund was established by George and Karleen Reidy in memory of George’s parents, T.P. and Helen M. Reidy. T.P. Reidy founded the Hartford Glass Company in 1939 and served as president of the company; upon his death in 1958, his wife Helen took up the position and led the company over the next twenty-five years. This fund is an endowment that provides financial assistance to St. John the Evangelist Church in Hartford City, Indiana.

This fund was created in 2002 by Betty L. and Robert W. Renner. Mr. Renner served many years as president then later as chairman of the board of Citizens State Bank. The fund supplies financial resources for various kinds of projects.

This fund was created in 2012 from the estate of Dr. Francis M. Reynolds, a prominent physician and surgeon practicing in Montpelier in the first half of the twentieth century. The fund provides beautification and maintenance for Woodlawn Cemetery in Montpelier.

Charles and Betty Walker established this endowment in 2015 in order to provide ongoing funding for community projects supported by the Foundation. The Walkers were both born in Blackford County and own a family farm in Harrison Township. They have been active in their church and in activities of the local agricultural community.

This fund was created by Ida Beard to assist in the upkeep of the Woodlawn Cemetery in Montpelier where her own family is also buried.

Last Day for GIFT VII Donations with Match at 8:30 am
Foundation Board of Directors Meeting at 5 pm
View Calendar 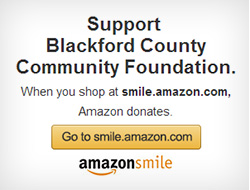